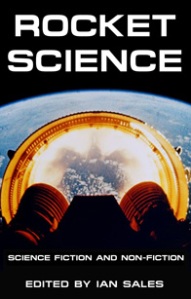 The review of the anthology as a whole is favorable, and Reynolds’ comment on Dancing on the Red Planet is that it’s “Surreal but note-perfect”.

Receiving a favorable comment to a story from one of the most well known British SF authors who not only specializes in stories set in the far future in space, but who also is a former scientist, is unexpected and amazing beyond words!

Thank you so much Alastair Reynolds!

(Image: the cover of Rocket Science, edited by Ian Sales.)