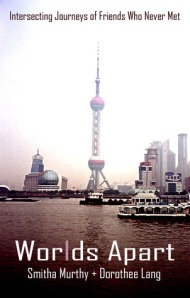 A review for Review Forward:

Smitha from India is working as a teacher in China and is homesick. Dorothee from Germany has been to India and blogs about her travels. Smitha finds Dorothee’s website and the two start a friendship of correspondence. By coincidence their travels, letters and meetings with others take them to the same locales and similar themes and challenges in life. Dorothee and Smitha’s emails, travel stories and photographs make up the text in Worlds Apart.

The letters describe the art of traveling, of living in the moment, of leaving and coming back, of Dorothee’s return to Germany and of Smitha’s stay in China. The letters move back and forth between places, countries and time, but it is never confusing and always honest, lyrical, mature and beautifully reflected:
“Life is stronger when you travel,” Cornelia said, “as it has more chance to happen.””I think it’s one of the most difficult parts of a journey: the step back into home from another place, or maybe even more: from another side of self.”

“It feels like the further we go, the more layers appear and the closer we get to the core of things. It’s one step leading to another in this vast journey called life.”

The authors’ thoughts on place, traveling, living, and the intimacy of the letters, is deeply moving and sympathetic. It’s like being included in the distant yet very close friendship of the writers.

The book also reminds me that in far earlier times humans were nomads, travelers, and that this instinct of moving and journeying still lives in us. Another prominent theme is modern humans’ longing for connection, with each other, and not the least, with themselves, with meaning and significance.

Smitha and Dorothee successfully demonstrate the interconnectedness between human beings not only in their letters, but also in their own circumstances. Both practice yoga and seek to understand the deeper aspects of life, both are experienced travelers and both write in English by choice, instead of in their first language.

As Smitha’s time in China draws to a close, the letters talk not only of the important process of coming home from a journey, but also of viewing one’s permanent place of living with the same freshness and lack of expectation as the places one sees when traveling.

In the end it’s about living in the now, about being and expressing, during travel and at home. Here it is beautifully done with strong and well flowing voices.

Berit Ellingsen is a Korean-Norwegian writer whose stories have or will appear in Elimae, SmokeLong, Metazen, decomP, Unstuck, and other literary journals. Her novel, The Empty City, is a story about silence and is reviewed here. Berit’s short story collection, Beneath the Liquid Skin, will be published by firthFORTH Books in late 2012. Find out more at beritellingsen.com.